Try a demo with our fun bots

What is a team dysfunction radar?

A team dysfunction radar is a tool to help identify where things are going wrong for a team. It offers a way to quickly pinpoint key weaknesses so that they may be addressed.

What is team dysfunction?

Team dysfunction is a term that describes diminished, disrupted or flawed team behavior. It most often appears as unhelpful habits or attitudes that undermine team effectiveness. It therefore significantly impacts team success.

Team dysfunction is often caused by fear. Members of the team make their own success or survival their priority rather than giving any consideration to the team. Such teams demonstrate a clear absence of trust and commitment. They are risk-averse so often avoid conflict and accountability.

Dysfunctional teams tend to have both low morale and low productivity. The quality of their outputs can also be low.

There are six key team dysfunctions. They are linked, with each acting as the stepping stone for the next.

This health check looks to team members to help define what’s going wrong. It sees each member register the degree to which each of the below dimensions applies to their team. A team leader can then see how safe the group feels and talk through what that means for the team.

The fear of being vulnerable stops the team from building trust with each other.

There is an artificial harmony that can stifle constructiveness in the team.

There is no healthy debate to critically evaluate ideas. Conflict is seen as criticism and taken personally.

Team members do not follow through on actions due to the lack of clarity or buy-in.

A lack of passion and interest means team members are less likely to commit to a course of action.

The team does not hold each other accountable for behaviors and performances because they want to avoid interpersonal issues.

With a lack of commitment toward a course of action, team members feel less accountable.

There is a focus on individual goals, rather than the collective success of the whole team.

Team members care about things other than the shared goals of the team. This is reinforced when team members are assessed individually rather than being assessed on their team’s performance.

The same challenges, problems, and mistakes are encountered by the team time and time again. Antipatterns are more common than solutions.

There are few opportunities to learn. Those that exist are not valued. This includes holding retrospective meetings with a regular cadence.

How to create a Health Check in TeamRetro 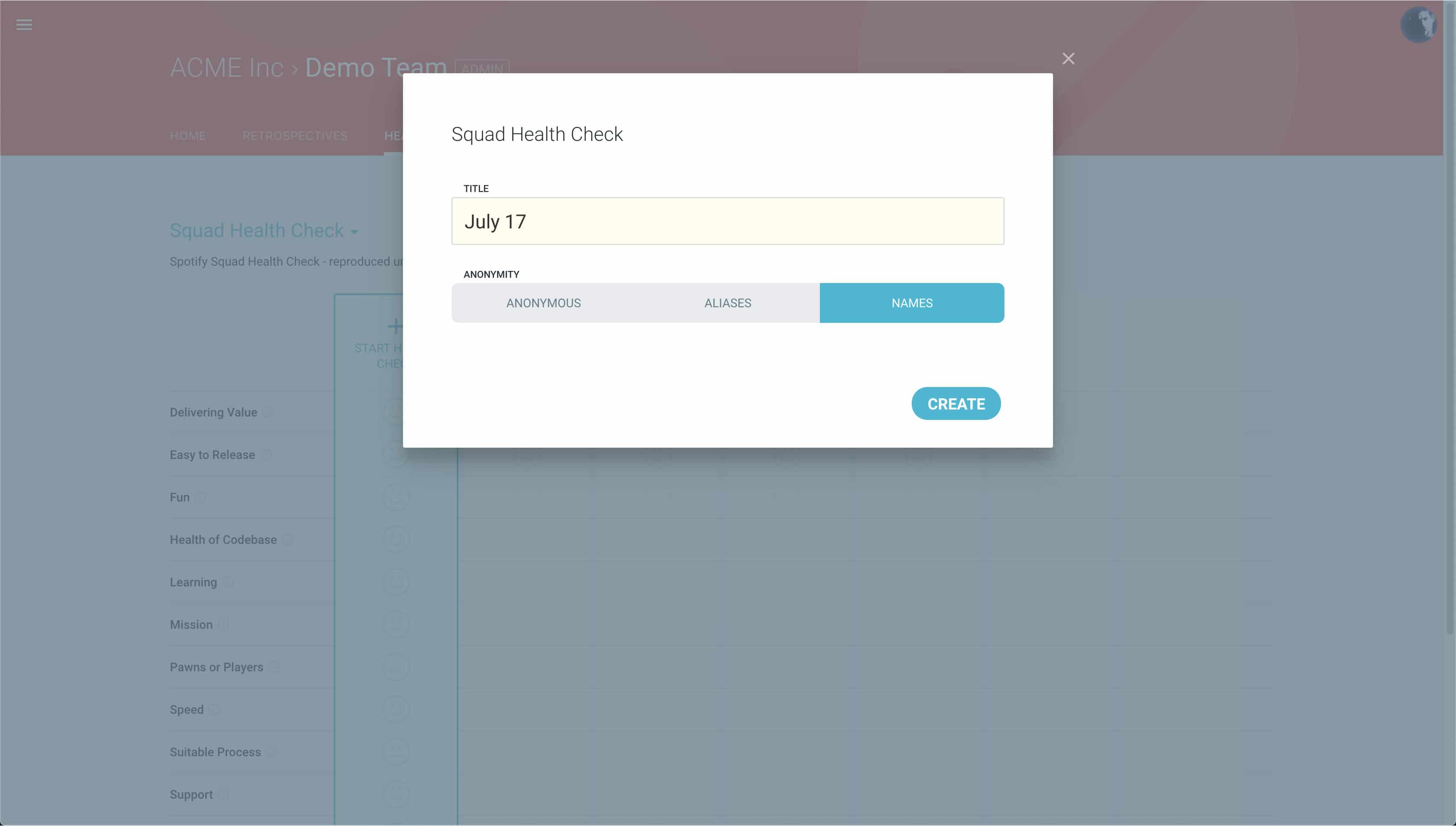 Your template is ready to go
Under Health Checks, select the health check you’d like to complete. Decide if you want to survey the team anonymously, using aliases or openly. 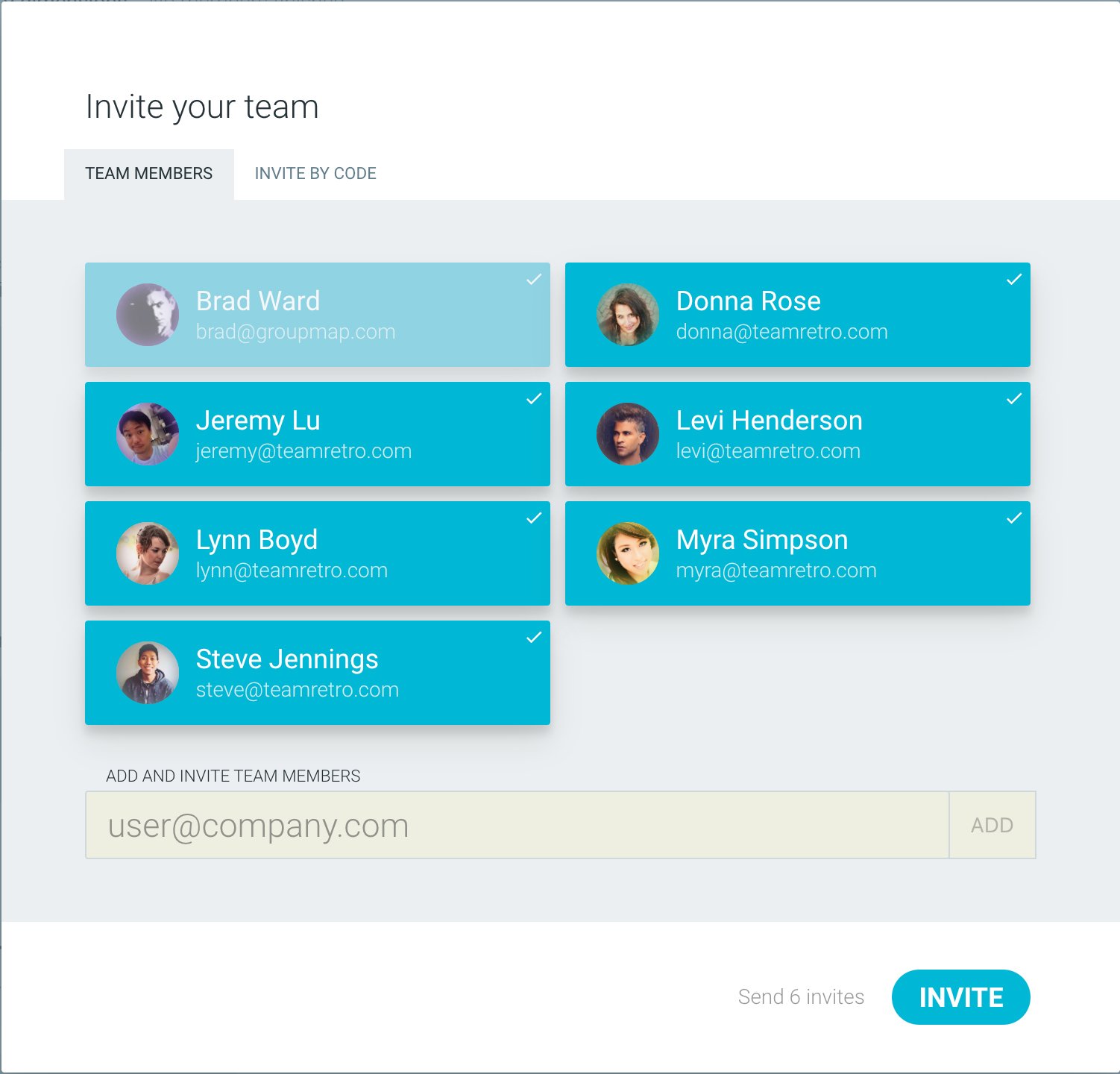 Invite your team wherever they are.
Invite by a unique and secure code, email address, share a link, use a QR code or post to your Slack channel. They can use their phone, tablet or PC. 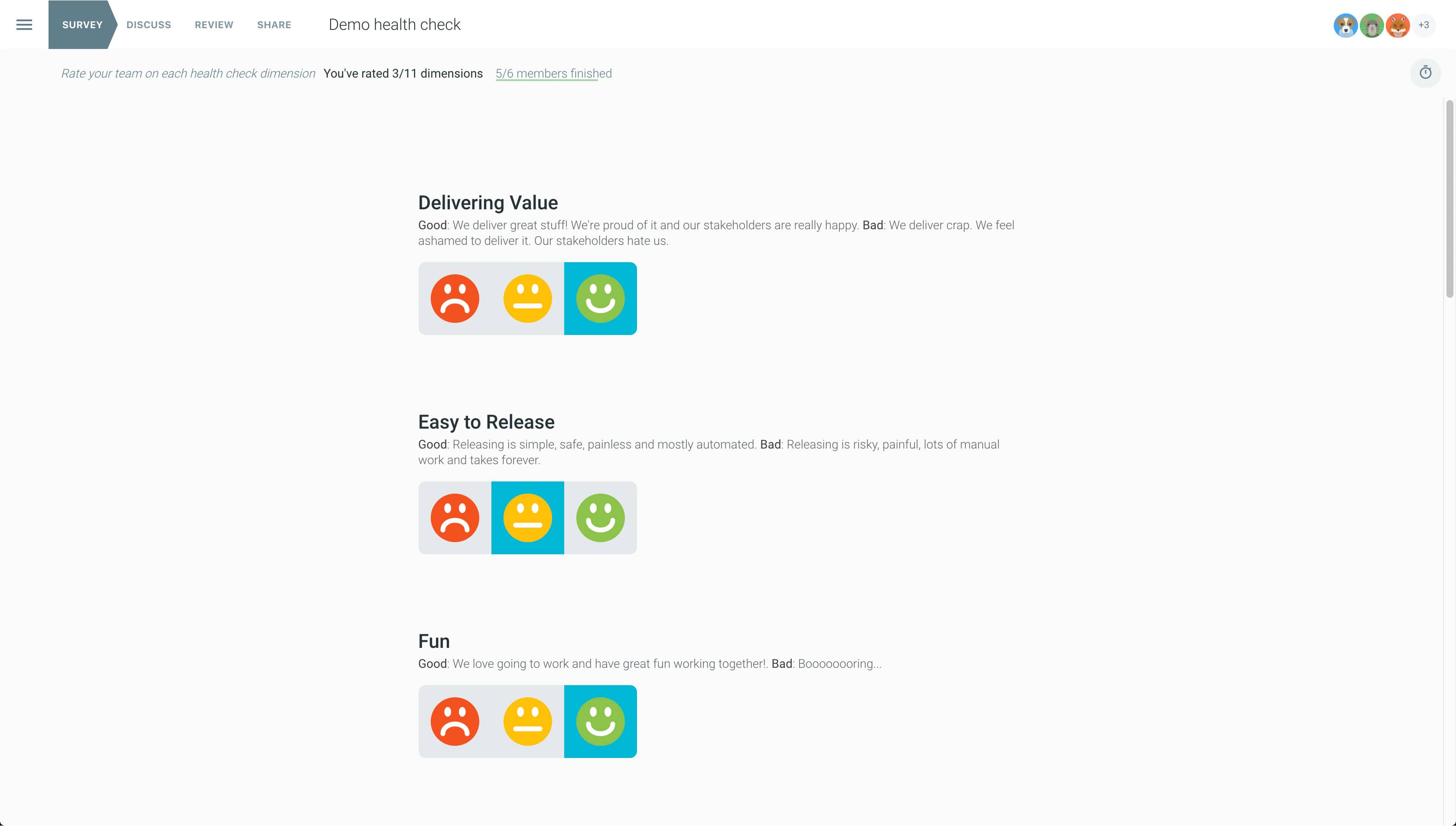 Survey the team independently and efficiently
Ask the team to reflect and rate along each dimension from happy to unhappy. You’ll see when everyone has finished. Use the in-built timer to keep things on track. 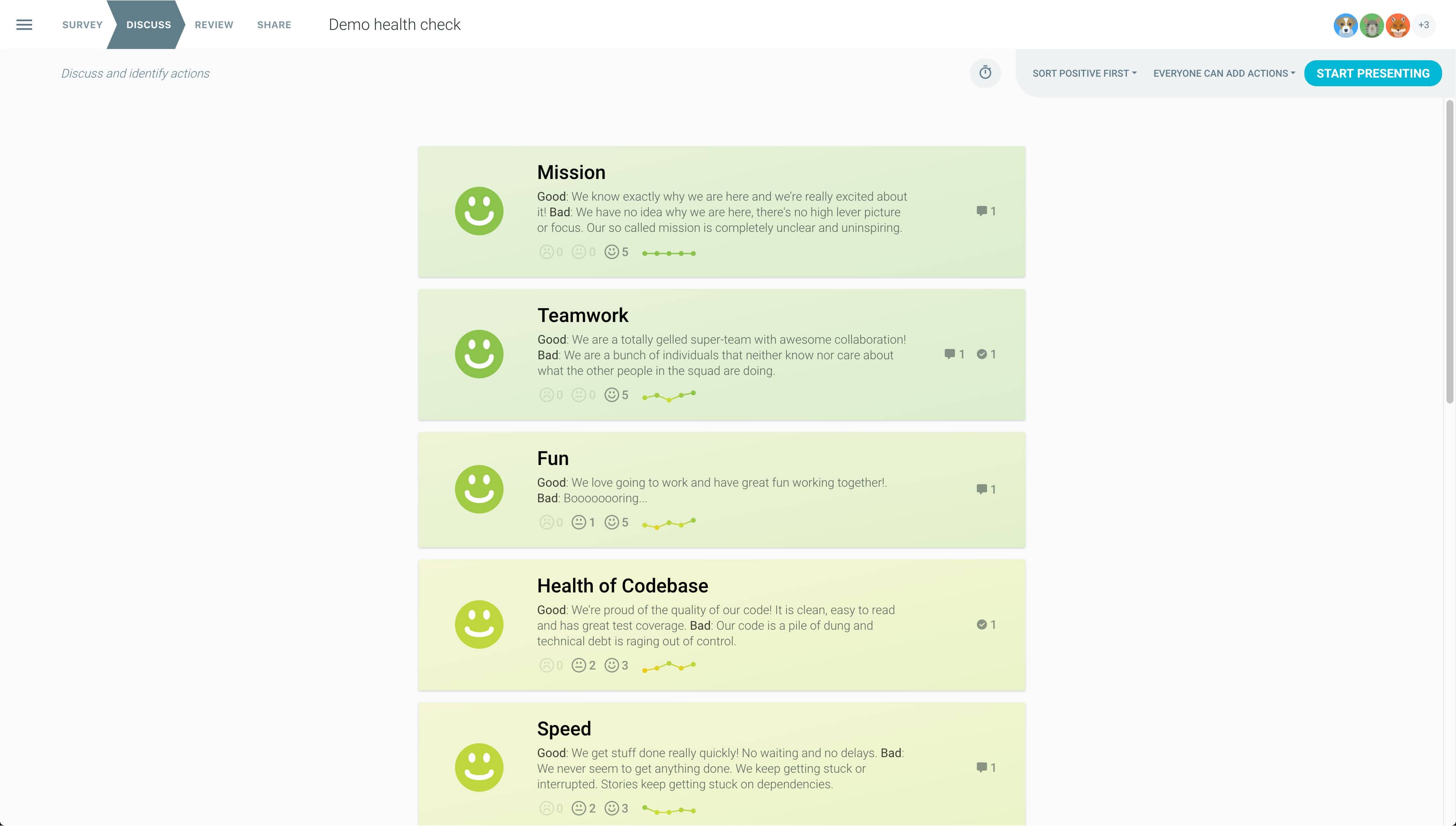 Reveal and discuss the results

Your health check data is displayed showing the average response and tally of each response. Sort dimensions by most positive, negative or mixed responses to make discussions more meaningful. 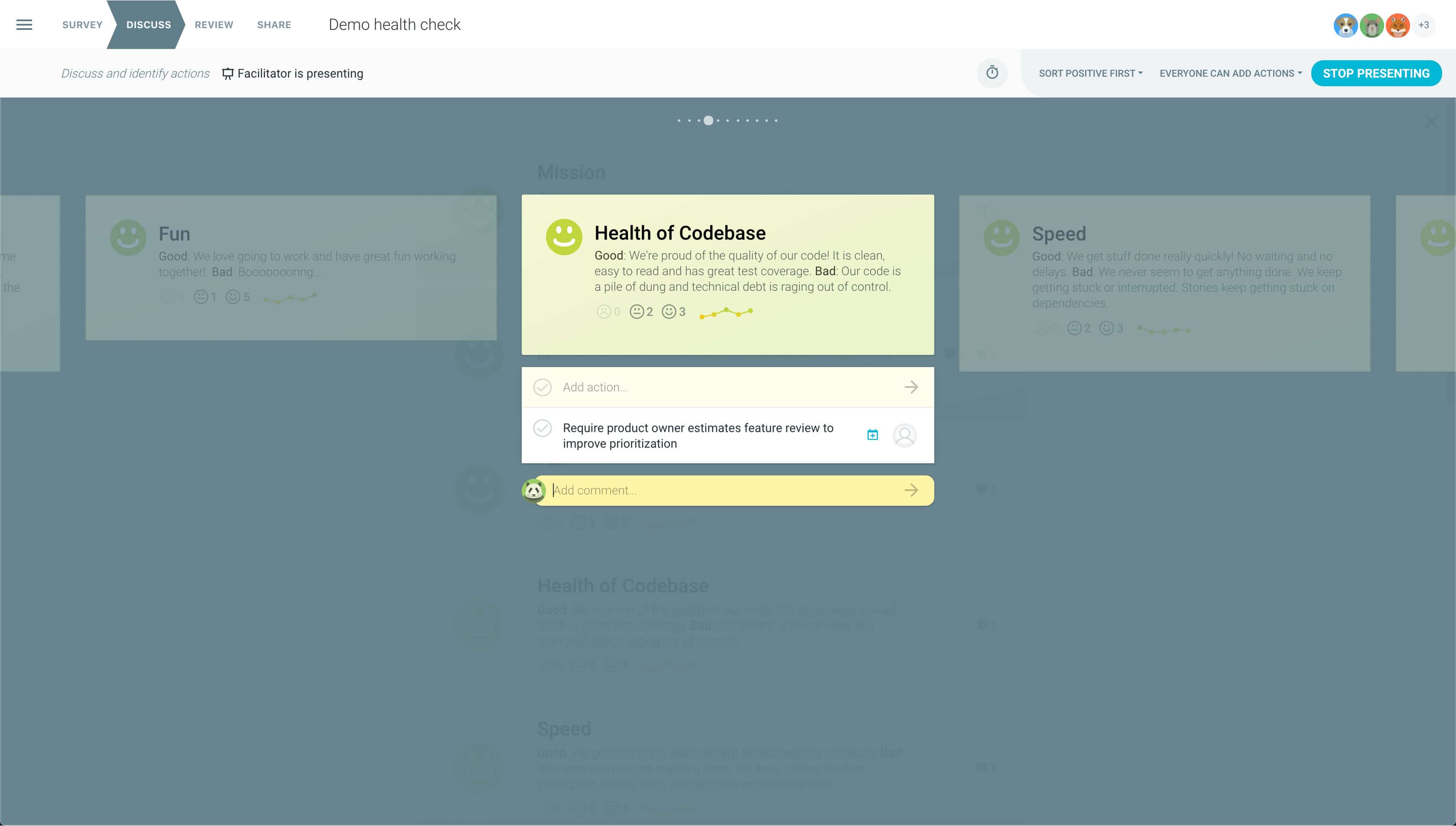 Keep conversation on track with Presentation Mode
Switch to presentation mode to sync devices making it easier to facilitate and focus conversations. Capture comments and actions along the way. 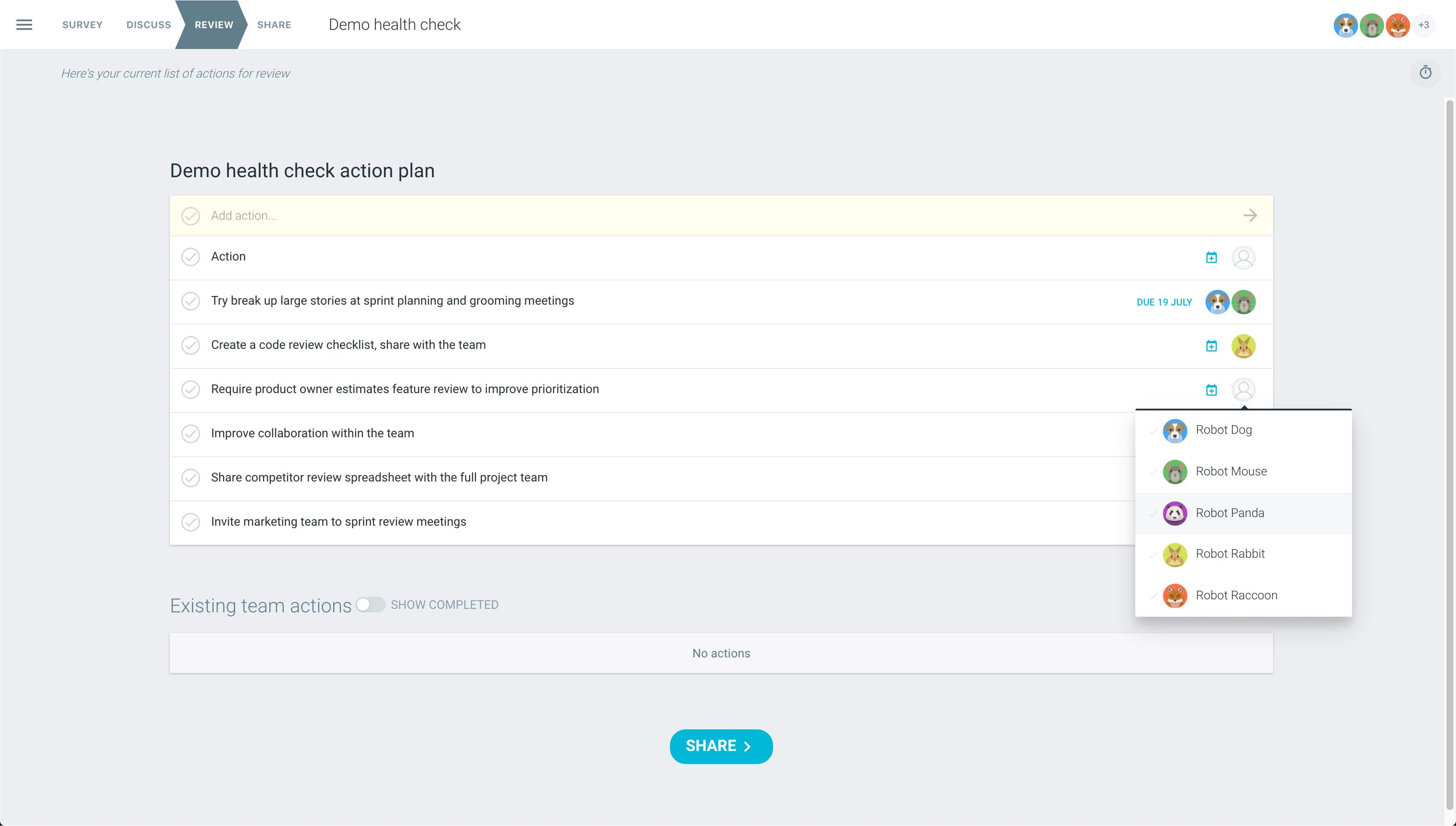 Review your action plan
Assign action owners and set due dates for new items and review prior actions. This action list can be tracked, shared or integrated into your other workflow tools. 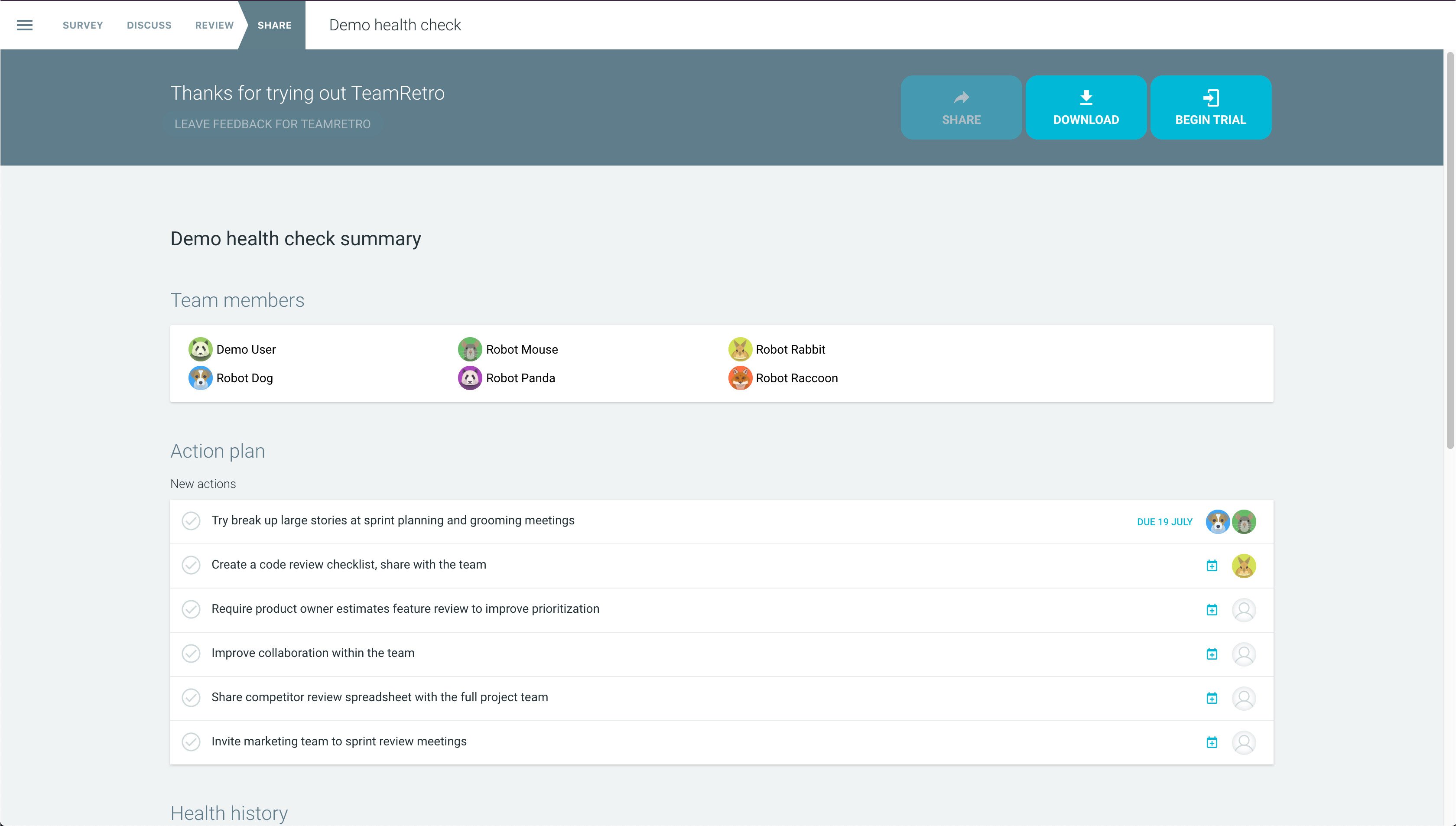 Share the results
Great work, you are all done! Share the results with your team via email, download and print or publish to tools like Jira, Asana and Trello. Results can be tracked in your dashboard.